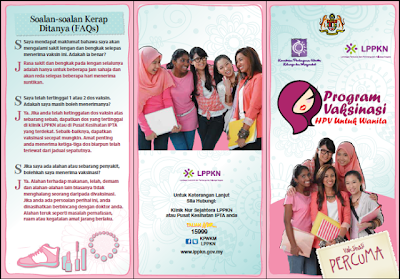 The HPV Vaccination Program (PVHPV)
Is a vaccination program
Initiated by...
Population and Family Development Board Malaysia (LPPKN)
Under the prevision of Ministry of Women, Family and Community Development (KPWKM).

The main objective for this vaccination program
Is to reduce the load of disease
As a cause of Cervical Cancer
For the next 20 years to come.

Cervical cancer is a disease
In which cells in the cervix grow abnormally.

About 99.7 per cent of cervical cancer cases
Are caused by the human papillomavirus (HPV).

Vaccinating against cervical cancer
May reduce deaths by as much as two-thirds.
It is the third most common cancer among Malaysians
And should be stopped!

All women from the age of 18 and above
And is not pregnant is eligible
For the free HPV vaccine.

Under the government initiative,
From 2nd of October to 16th November,
LPPKN will be going to Universities
In Klang Valley, Sabah and Sarawak
To give out free vaccine
To all the selected Universities students.

The vaccination programme starts at 9am to 4pm.
The schedule is as below : 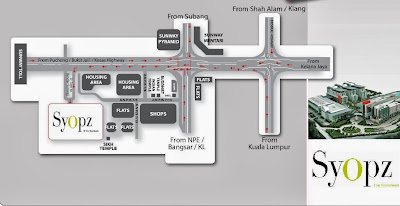 For those who complete all three doses,
They will be given a free pass to a concert
With locally-renowned artistes
That is scheduled in the second quarter of 2014. (2nd March 2014) 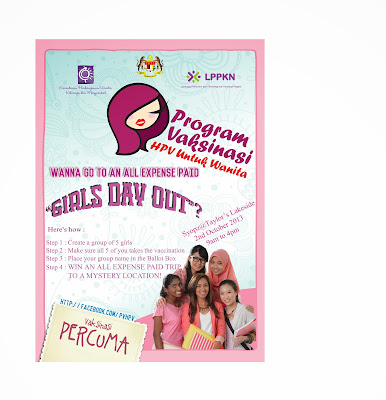 In the immediate,
Participants from each university or college
Who register to vaccinate
In a group of five or more
Will be eligible for a lucky draw,
With the prize being a fully-sponsored
Girls Day Out session.
(The destination of full expense paid
Girls Day Out will be a secret
But we promise it will be something really fun )

Apart from the roadshow,
Eligible participants can also receive the HPV vaccination
At any one of the 58 LPPKN Nur Sejahtera clinics
Or health centres at public universities nationwide.

The National Cancer Registry in 2007
Reported that as many as 847 new cases
Of cervical cancer were detected.
This means that on average,
About two to three new cases were confirmed every day.
Cervical cancer is the third most common cancer
Affecting Malaysian women.